If you are interested in professional services I offer, please proceed to my "services" page here--

I've had a long and in some ways successful career, but I am not exactly sure in what. One of my employers called me a "generalist," by which I think he meant someone who works in a lot of different fields.

A less kind person might say "a mile wide and an inch deep" but I will let others decide.

Feel free to click on a tab for more info about things I've done, (dis)-organized by the type of pursuit.

If you just want to get hold of me, feel free to click on the Contact tab. I'm always happy to answer questions or hear about what you are up to!

I started playing violin at age 10, and played in the orchestra at Cleveland High School in Portland, Oregon.

I went to University of Oregon, and majored in music. I specialized in classical violin, but also played guitar in a couple of rock bands.

After college I went on the road playing guitar and bass in rock and country groups. A college friend was drummer for Mason Williams ("Classical Gas") and I had the opportunity to play with Mason, first on bass, then on bluegrass fiddle. I toured with him, playing in a small group and also appearing in orchestra pops concerts.

Back in Portland, I started up a number of bands, including Wallpaper Music, D'anse Combeau, Playpen, The Patios, Prince Gillooly. These acts were pretty bizarre but did find something of an audience, and were staffed with really talented and interesting folks.

While building a studio business back in Portland, I started working on musical theater projects as performer and music director. I've worked on over 70 shows in various capacities. As my career bounced around to the film business and academia, I've kept performing, focusing more and more on violin.

In the recent past, I performed twice with the Eugene Symphony, playing fiddle in an arrangement I created, and also with Portland Civic Orchestra.

Currently I perform with a classical trio, a country trio, a gospel quartet, and as a bluegrass soloist. More info on these groups is here--

I am always looking for performing opportunities. Please click the Contact tab to get hold of me.

I always loved teaching and gave private lessons here and there through my career.

In 2002 I enrolled at Pacific University in Forest Grove where I spent a year earning a masters degree in education.

In 2003 I got hired at Portland State University where I'm now starting my 16th year as a full-time Senior Instructor.

At PSU, my main focus is on Music Technology and Production, reflecting my experience in the studio and film business. I also teach courses in music history, music theory, and film music.

In 2007, I established Oregon Music Technology School which offered a certfication program in various aspects of music production. That program ended in spring, 2016. OMTS is now offering online courses and private lessons/consultation. Visit this site for more info--

My college bachelors degree was in music composition.

I created some scores for theatrical productions, which then landed me a scoring job for a Portland film called Paydirt directed by Penny Allen. I also ended up scoring several more feature films and TV shows over the years, which you can see on my IMDB page if you like--

Most of my professional composition work was less sexy, but jobs came in on a more regular basis. I scored many commercials, including some national spots, a lot of "corporate video," and some live shows. My clients included Nike, Sony, Freightliner, Tektronix, Nissan, Intel, Payless Drug, and Bob's Hamburger in Salems.

While in college, I began doing part copying for Oregon Symphony conductor Norman Leyden. At that time it was all done by hand with special ink and pens, and it was arduous but fun.

Like everything else, this craft transitioned to the computer in the 1980's. I began using software called Finale to make sheet music. It was a long learning curve, but now this is one of my specialties. I've done charts for Bryan Johanson, Hollis Taylor, Rece Jay, Keith Clark, and a bunch of others.

I began working in the recording studio in Eugene in the 1970's. This was the days of recording tape, and the work I did was various types of band recording. I had the opportunity to work is some great rooms in Portland and LA over those early years.

In 1985, I founded a recording business in Portland, which was incorporated in 1988 under the name Newton Bard, Inc. With partner Michael Bard, this forward-looking business spanned the introduction of digital technology, doubling its bottom line for several consecutive years.

Several years ago, I began experimenting with web technology, and am now web admin for a couple of businesses. Specialties include working with php, css, mysql, javascript/jquery, and ColdFusion technologies.

The link below is to hillbridge.com, a company marketing steel drum sheet music. I created the site and am currently its admin. 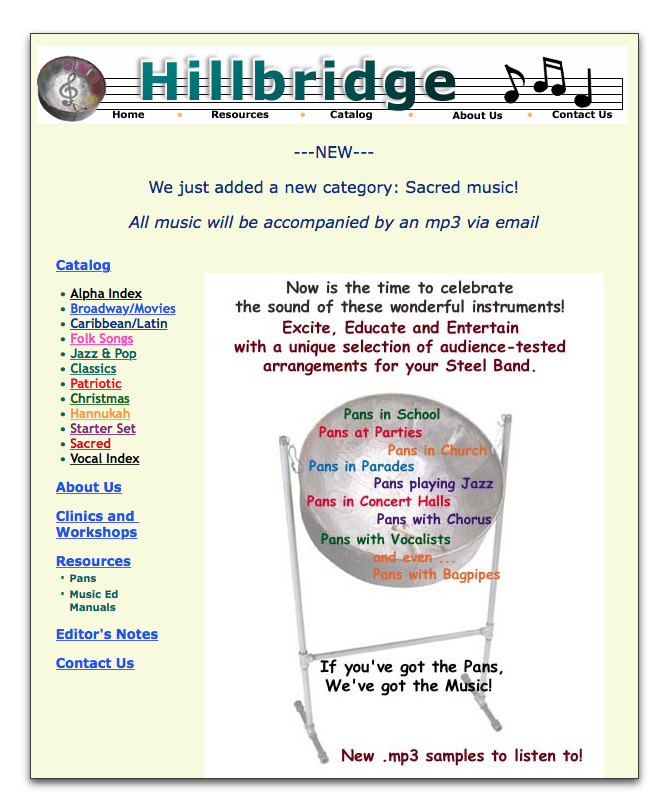 The Executioners My first real band was a high school group called The Excecutioners. The high school was Cleveland High School in Portland Oregon. We have a simple page with some history and photos here. We don't have any recordings that we know of (fortunately).

Johnson Creek Blues Band/Sweat Control When I returned to Portland after 3 years at U of O, I got together with some friends old and new and we formed a sort of progressive rock group, influenced mostly by Frank Zappa and various other rock groups. We experimented with some comedy, and played around a couple of small clubs in SE Portland. The page for this ensemble is here.

D'Anse Combeau When I came back to Portland from various travels, I joined a strange local ensemble called Tu-Tu Band. Out of those relationships were formed several very creative endeavors, includng Wallpaper Music, Playpen: The Internation Playpen of the Arts, and, probably the better known of the collection, D'Anse Combeau. The D'Anse Combeau page is fairly complete, and located here. Feel free to click on links including audio.

The Fiddler In the 1980's Jon appeared as The Fiddler at Portland Trail Blazer games. It was a popular feature during those years, as Newton revved up the crowd with lightning fast bluegrass.

Recently the Blazers brought The Fiddler back for a return engagement. 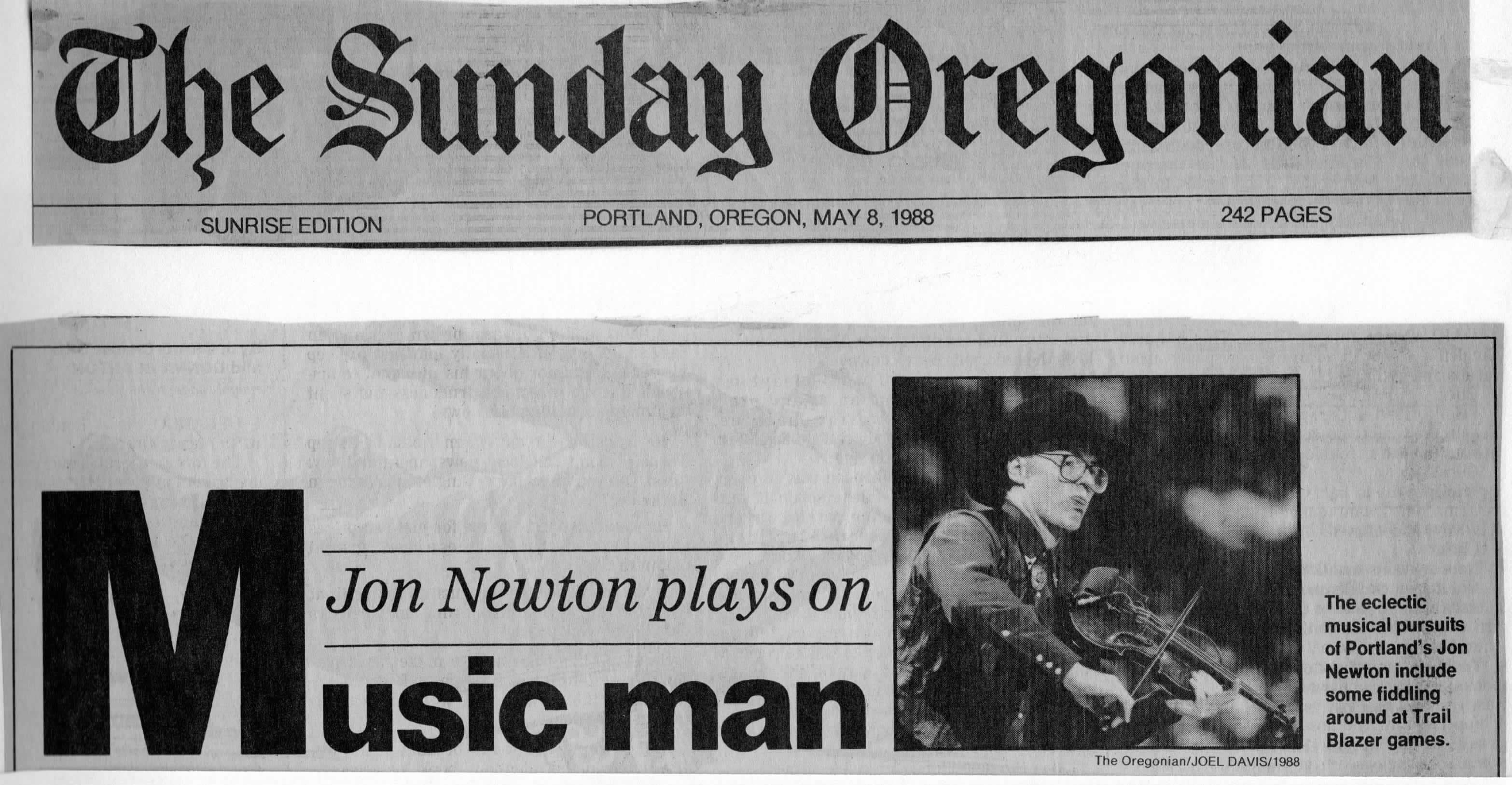